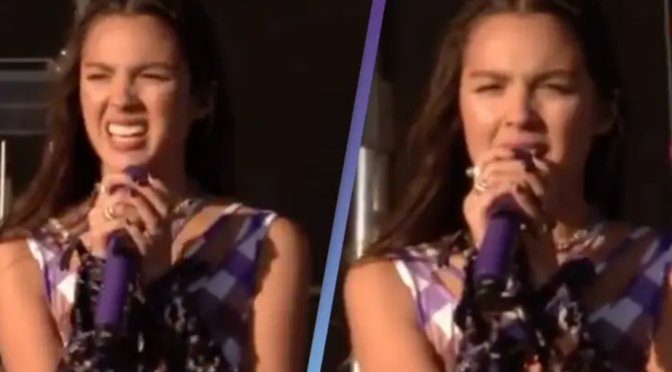 In response to the Supreme Court’s decision to overturn Roe v. Wade, Olivia Rodrigo invited Lily Allen to perform “F*** You” at Glastonbury. The 19-year-old expressed her “devastation and terror” over the decision and dedicated the song to the five judges who voted to eliminate the constitutional right to an abortion. Allen was observed giving the middle finger while standing next to Rodrigo.

Before Allen came on the stage, Rodrigo told the crowd: “I’m devastated and terrified. So many women and so many girls are going to die because of this.”

The pop star continued: “I wanted to dedicate this next song to the five members of the Supreme Court who have shown us that at the end of the day, they truly don’t give a shit about freedom.

Then Allen entered the stage and joined Rodrigo in singing her 2009 hit, F**k You, which she has previously claimed is a song about George W. Bush. She once told a crowd at a performance in So Paulo: “This f*****g a**hole who used to be the president of the United States of America was the subject of the original writing. George W. Bush is his name.”

The song was dedicated by Allen at Glastonbury 2009 to the European Parliament elections, which had just taken place weeks earlier and saw the far-right British National Party win seats for the first time ever.

The Roe v. Wade decision, which had been upheld for 50 years and had given millions of women the legal right to an abortion, was reversed by the US Supreme Court on Friday (24 June).

The 1973 Supreme Court decision Roe v. Wade legalized abortion up until the time of fetal viability, which is typically 24 weeks into pregnancy.

According to statistics from Planned Parenthood published by BBC News, the restriction is anticipated to reduce access to abortions for roughly 36 million women in the US who are of reproductive age.

Before blasting out “Your Power” on Friday, Billie Eilish spoke about the repeal during her headlining concert.

She told festivalgoers: “The song we’re about to do is, I think, one of the favorites that we’ve written and it’s about the concept of power and how we need to always remember how not to abuse it.

“And today is a really, really dark day for women in the US. I’m just going to say that as I cannot bear to think about it any longer at this moment.”