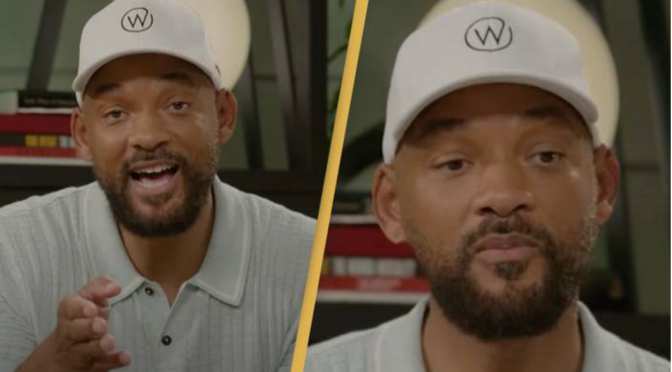 Will Smith shared a heartfelt video on social media on Friday, directly addressing the moment at the Oscars when he slapped presenter Chris Rock. An earnest-looking Smith responds to fan concerns about the fallout from the slap, which made news all around the world, in the video, the “King Richard” actor’s first response to the issue since his apologetic post in March.

It’s the first time Smith has spoken publicly about the now-famous incident that resulted in his 10-year ban from Academy functions.

Will has addressed: “It’s been a minute… Over the last few months, I’ve been doing a lot of thinking and personal work… You asked a lot of fair questions that I wanted to take some time to answer.”

He then sat down, alone in his home, and went on to explain himself, the first question asked why he didn’t apologize to Chris.

Will explained: “I was fogged out by that point. It’s all fuzzy. I’ve reached out to Chris and the message that came back is that he’s not ready to talk. And when he is, he will reach out.

“So I will say to you, Chris, I apologize to you. My behavior was unacceptable and I’m here whenever you’re ready to talk.”

“I want to apologize to Chris’s family. Specifically, Tony Rock [Chris’ younger brother]. You know, we had a great relationship. You know, Tony Rock was my man. And this is probably irreparable.”

Will continued by saying that while he wouldn’t be going into great detail in this video, he had spent the previous three months replaying and trying to comprehend the nuances of what had occurred, he assured: “But I can say to all of you, there is no part of me that thinks that was the right way to behave at that moment. There’s no part of me that thinks that’s the optimal way to handle a feeling of disrespect or insults.”

Will clarified if Jada had “requested him to do something” and said, “that no, Jada had not asked him to do anything and that he had made the decision to slap Chris totally on his own.” 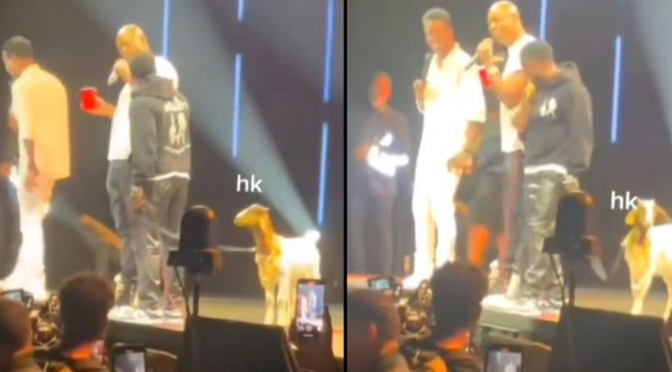 In a bizarre twist of events, Kevin Hart gifted Chris Rock a goat during a live comedy show and named him “Will Smith”! Kevin Hart has explained his decision to present Chris Rock with a goat on stage during his stand-up show at Madison Square Garden.

Hart, who over the weekend was joined by Dave Chappelle for the New York performance as well, stated to the audience that the goat’s name was Will Smith in an obvious allusion to the notorious Oscars brawl between Rock and the Hollywood star.

Footage of the gig showed Rock protesting against accepting the goat, remarking: “I’m not taking care of that s***!”

Rock and Will Smith got into an altercation at the Oscars comedy in March, as fans are aware. To everyone’s surprise, Smith stormed up to Rock during the dramatic on-stage incident and smacked him in the face.

It happened after Rock made a joke about Jada Pinkett Smith’s alopecia-related shaved head.

Hart couldn’t help but make fun of the situation at their co-headlining show when accompanied on stage by fellow comic Dave Chappelle months after the initial uproar and Smith’s public apologies.

In a clip, which has emerged on TikTok, the Fatherhood star is seen holding the goat’s lead and says: “What the f**k did you just say?”

“Don’t act like I’m crazy, you brought the goat here. This n***** [the goat] is confused with the f**k is happening. What you gonna name this goat Chris?” Chappelle asked, to which Hart, not missing a beat, responded: “The name is Will Smith.”

The moment left the audience howling with laughter, leading Hart to ask the crowd deadpan: “What? What did I say?”

The video which has been liked over 28,000 times received a thousand of comments from users who said it was ‘the best joke ever’.

One wrote: “That’s the best joke ever,” while another added: “That’s hilarious”.

On Monday (25 July), Hart recalled surprising Rock with the goat live on stage on during an appearance on The Tonight Show with Jimmy Fallon.

“He’s a large part of the reason that I am where I am today in my career just from his advice, his insight, et cetera, and he’s my G.O.A.T.

Hart admitted that he didn’t quite expect the goat to act up after calling his “goat guy” to help with the prank.

He added: “In my mind, I thought the goat is gonna come out and do a tight 2 minutes.